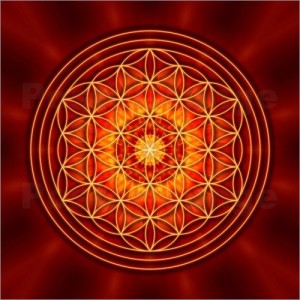 Gnostic Christians used to call their religion Synesaktism – another word for Agape – which means ‘The Way of Shaktism’, referring to Tantric Yoni-Worship.

One of the most important rituals was preparing a ‘drink of immortality’ made from menstrual blood, which is full of healing stem cells, which can actually activate our cellular capacity to regenerate and transport us to endocrine states of rapture. Or in a spiritual sense open us to the Frequency of Love and Eternal Life, transporting us to another Dimension – called Heaven, Paradise, Nirvana etc.

This ‘Love Feast’ or ‘Sacred Marriage’ – a core part of the Menstrual Mysteries – was eventually declared a heresy and women were barred from participating in Christian rites.

However the ‘Power of Renewal, Rebirth, and Resurrection’ previously associated with the Holy Womb and Menstrual Blood of the Divine Mother was transferred to the story of Jesus and his ritual of Eucharist – ‘hic est sanguis meus – this is the Chalice of my Blood’ – where worshippers ‘drank his blood’ to gain the power of Rebirth through him.

In most ancient myths and religions, throughout the world dating back hundreds of thousands of years, the power of rebirth had always been a blessing of the Feminine Womb – embodied and gifted by Sacred Womb Priestesses across many cultures. It had never been held by a man. Although there are many legends about the ‘menstrual powers of female shamans’ being stolen by male gods.

The Holy Grail, in its true original essence, is the Womb.

Women born many, many thousands of years ago in what we might called ‘Original Innocence’ – before many of our genetic capabilities went offline, held this power naturally, as a birthright, shared with their tribes in renewal rituals.

Since those times, once the birthright was lost, women across many lineages and cultures – Womb Priestesses – have practiced many varied ways to heal, clear and open the Womb, so it can once again embody the frequency of Love, of Original Innocence, so that the energetic and physical stem cell capacity can activate purer states of consciousness and activate incredible regenerative healing. This knowledge has been almost lost over the last thousand years, as it has been fragmented, scattered and deliberately destroyed.

Now it is desiring to return, to ‘renew our lands’ as the myths go.

Earlier this year Dr Azra Bertrand and I met with a top international research scientist working with menstrual blood stem cells. His research indicated they had the capacity to work ‘miracles’. He described how the first time he used Menstrual Blood Stem Cells he felt like he had been ‘reborn’ – an unfit man in his late fifties, he’d had to run around the block because he had so much energy.

Another research scientist in his sixties working with stem cells had experienced his hair change from grey to the black of his youth in a matter of months. Throughout the world, in secret, these experiments are happening – in China, Russia, India, and more.

Whilst women are giving their power away to patriarchal ideologies, taking drugs to stop their menstrual cycle, using cancer-causing chemical bleached tampons to stem the flow, seeing their Menses as an inconvenient ‘curse’ they are ashamed of, male scientists around the world are using the power to experience states of physical and spiritual high.

Isn’t it time we reclaimed our power? Fountain of Life will have much more to say about this subject in 2013!

Extract from Womb Awakening: Return of the Feminine, Rebirth of the Masculine © Fountain of Life