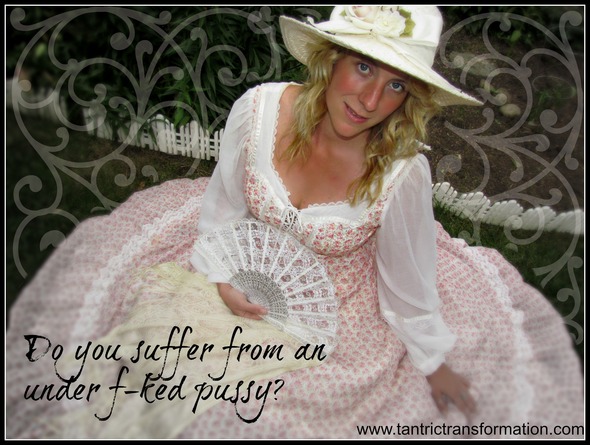 “A good orgasm is satisfying, but a great orgasm can be a revelation of your deepest being, unfolding the truth of who you are in ecstatic communion with your lover.” — David Deida

Recently I was speaking with a young woman about her orgasms and her state of emotion. She shared with me how she had been diagnosed with depression and ADHD, how PMS was terrible for her and how she felt that she needed a man in her life to protect, save and hold her. She had been abandoned by the men in her past and had gained an ill understanding of her own heart and soul. Disconnected from her pussy and from her true self she exhibited self-hatred and shame, she felt embarrassed and lacked confidence, yet tried to hide all of this under a bubbly, loud personality with a beaming smile and flashy sex drive.Practically throwing herself at men, begging for their attention so she could survive one more day and pretend that for that moment she had love in her life.

As I sat there listening to her story, watching the emotions cross over her face I could feel her pain, I found myself wanting to just embrace her and tell her that everything would be okay, but that was the protective mama bear in me. Instead I chose to be honest and share the facts, “Sounds like you need to be properly f-ked my dear,” is what I responded. She looked at me and said, “What?” I restated it, “It sounds like you need to be properly f-ked, I don’t mean go have sex, just some junk food sex, I mean you need some gourmet, yummie, fulfilling f-king. You need an orgasm that fills your whole body.” She looked at me a bit taken back and then responded with,”Oh I just had sex, I had an orgasm, a good one. It was very good.”

“But was it fulfilling and gourmet?”
“Yes, yes I think it was. Maybe it was not exactly as gourmet as you are speaking of, but it was awesome.”
“Did it fill your whole body with rapture? Were you tingly and full of energy for days to come or did you grow tired and the orgasmic feeling passed through you within a few hours?”

A confused look came upon her face.

Here is the problem: this world is suffering from the majority of women not having real orgasms, shit most women don’t even have orgasms at all, they fake them, they hide out in their minds and they grow bitter toward life. Those who do have an orgasm normally rely on a clitorial quick fix or tighten their bodies up so much during an orgasm that it is short lived and never fills their whole being; body, heart and soul. They lack the orgasmic rapture that they need. Orgasm is mandatory for a woman to live an abundant, happy, healthy, full life. And not just any old orgasm will do this. The deeper, more penetrating an orgasm, the more life and creative energy, love and surrender a woman will bring to the world. To you.

When her emotions become muted and she is closed, lacking expression toward life she is close to running on empty in her orgasmic bank account. When she is overly hateful or stuck in depression, full of what seems to be crazy hormonal ups and downs she is lacking in her orgasmic bank account. When she lays down and has sex but is indifferent to what happens in the bedroom or cannot share her desires, her boundaries and her fears she is lacking in her orgasmic bank account and this is where the trouble resides. Worse yet, she won’t tell you the truth about what is going on because she herself does not understand. Even if she has a clue her voice will be seized by the darkness of her pussy frustration and her ego will have hold of her so strongly that she won’t be capable of vocalizing the unspeakable to you. That unspeakable being that she needs to be f-ked wide open by a man that can penetrate not only her flesh but her heart and soul. She needs his strength, his firmness, his masculine energy to be unleashed in her at a cellular level and TAKE her beyond the point of no return and right into the heavens of rapture. Only at this level can she trust her man and allow herself once again to be seen.

As Nicole Daedone, author of Slow Sex states, “Running on empty is not what you want your woman to be, unless you like irritability, impatience, hypersensitivity, and for everything to be your fault. Because in the space between what she asks for and what she really wants, resentment will begin to fester. And you, sir, will be the one she blames.

“Find out what she is hungry for, and give it to her. Never accept her first answer. Ask again. And again. Make it a part of your game plan to prod and push until she releases what she is withholding and her desire comes flying out. At first, her desire might sound like anger. She may need to blow off steam. Don’t take it personally, even if she says hurtful things.

“Keep asking until you feel her true desire release. You will feel it in your body when she finally lets go. Regardless of how much resistance she has, don’t stop asking until you feel it. You are helping her unravel a lifetime of conditioning – old beliefs and habits and rules that are suffocating the bright, lovely, sexy woman within.

“That’s the woman you want to be with. So if you have to ask all night, ask all night. You’ll know it when she finally speaks her desire because you will be able to feel it, landing with a satisfying *thunk in your body.

“Then give it to her, and you’ll be giving her the thing she never thought she could get: not just the desire, but approval for having the desire at all. ”

What Nicole is stating here is the powerful truth and it is hard to understand for many men because men have the ability to state what they need or want clearly most of the time. Men have also been raised differently then women and do not have the same shame placed upon them for wanting or needing sex. It is expected that a man craves, thinks about and will ask for sex. It is common thought in many marriages and in society that it is the woman’s place “to make sure to keep her man happy, else he will surely stray and find it somewhere else” but for a woman to be open about her cravings labels her a whore or slut. Even if we are not aware of this low grade consciousness and believe ourselves to be above this sort of thinking, the consciousness and programs still exist for all of us. They lay there in the covers of darkness within our psyche and if we are women they make themselves known pretty quickly as soon as we face our undernourished needs.

So gentlemen or those in the masculine role of the relationship, never stop asking your woman what she desires. Never stop inquiring about her deep hungers. Dig in her cavern and find the treasures she has hidden there, tell her frequently that you love her, that she is your babe, your special lady, your love. Touch her often and playfully and set aside time to REALLY be with her. This is not meaning a movie and dinner or even snuggle time on the couch, this means eye to eye, deep focused communication time. Communicate your love with words, looks and touch and ALWAYS keep asking. She will open to you.