Throughout the annals of mythology and spirituality, the devi – Kunti – (the Yin/Shakti opposite Yang/Shiva) has taken many forms and faces; some of these are translated accurately, others are not. Many have become owned (over time) by some cannonisation, doctrine .. or set of dogmatic rules.

Wholeness and the first separation

At the deepest and most primordial, Yin and Yang .. deva and devi are the first separation but, they are never separate. In Hindi, she is Shakti, he is Shiva

deva : d’e’v’a is the primordial masculine principle; an essence or principle, originally; ‘a bright or shining one’ from *div– to shine; the “sign” or “omen” of the energy which pervades; bestowing, producing or imparting; as with hot fire or passion from “above” (as in Heavenly); sometimes seen as a “gift” with the concept of going inward, within or in; the life in-breath; as an aspect of Brahma

devi : dh’e’v’i is the primordial feminine principle; placement or holding; potential to go beyond or transcend; consciousness potential as in “hidden” or “the inner self” with wonder, awe; the energy which pervades ; bestowing, producing or imparting; as with cold fire or passion of receptivity; that which has the potential to ‘learn’ or evolve as the essence of compassion with the power to obtain or become something else

Yoga, itself, is the UNION of the deva and the devi — masculine and feminine — Yin and Yang — Shiva and Shakti

The Tibetans go one step further; they call it Tantra – describing it as the warp and weft of the cloth as in the “sacred” weaving

akin to Christianity’s “Divine Marriage” of the Heavenly Bride (Yin, the devi) and Bridegroom (Yang, the deva) .. for it is written:

The Tao or “The Way of All Things” is a flow, an inter-penetration, an omniscience and an omnipotence and a homeostasis of both masculine and feminine, positive and negative principles

7000 years of Kundalini and the divine marriage 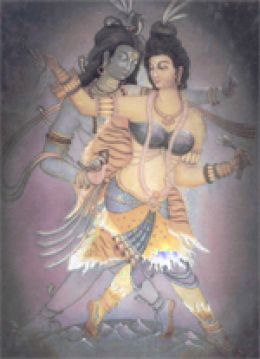 The elements of the Force and the Field were inscribed on a tortise shell 5000 or so years ago; “k’un” is of the earth; the feminine; the energy of life.

Hindu’s derived the name Cunti/Kundi and all its variations that have formed the roots of Country, Kind and Kildare; Kundalini as it is propogated by the purveyors of “authentic Western Guru’s” is nothing more than a thought-form (Tulpa) far removed from the Sanskrit roots of the word.

But then, the Primordial Feminine the first separation from the void is something that the conscious mind cannot manipulate or control for the simple reason that this one bit computer is nothing more than the product of one’s dis-eased feminine .. a feminine that is separated from the Void.

The feminine is the field in the pairing of the force and the field; she is sometimes represented as ‘of the manifestation‘ … ‘of the earth‘. In the Christian prayer, we find “Thy Will be done in Earth as it is in Heaven“.

To most, she is mysterious, deep, dark sultry ..

She is Serena (from the Latin serene) unagitated; without losing self-possession; calm; tranquil; fertile; she was a ‘Golden Hind‘ (female deer) in ‘Hercules: The Legendary Journeys‘

She is also Tara, the devi Hindu Mahavidya, the saving aspect of the Goddess who in Buddhist terms is the female deity (devi) representing enlightened activity and fearlessness.

In Polynesian Mythology, she is the ‘sea goddess’; the ruler of the element of water.

But, she is also Diana the virgin, the equivalent of the Greek Artemis born with her twin brother Apollo.

And so, before it was corrupted, we have the story of the Virgin Mary — so much a parallel to the story of Kunti in the Mahabaratra

She is Ishtar .. the Assyrian and Babylonian counterpart to the Sumerian Inanna and to the cognate northwest Semitic goddess Astarte

Ancient Indian Vedic texts refer to Makkah as a place where Alla the Mother Goddess was worshiped. In Sanskrit, Alla means “mother.”

This name was connected to the Hindu Goddess Ila. She was the consort of the Hindu God Sivain his form known as Il, and this form of Siva was known and worshiped in pre-Islamic Makkah. A great deal of cultural and spiritual interchange took place between the merchants of Makkah and India.

“Woman is the radiance of God; she is not your beloved.
She is the Creator—you could say that she is not created.”

So, once again, we have a whore word .. Alla as the divine feminine, the “moon”, the goddess of Fertility, the symbol of womanhood .. transliterated from Ancient Aramaic as “sin“. Moon was worshipped in its threefold existence – waxing, (maiden), full (pregnant mother) and waning (old wise woman). The Virgin was the New Moon.

“man′s supreme witnessing of Allâh
is in the form of the woman during
the act of sexual union ..”

In the Kabbalah, just below the first Sphere (sefirah) of divine emanation known as Keter(crown; summit; pinnacle), lie the two roots of masculine and feminine, known as Hokhmah andBinah.

Binah is the Kabbalistic feminine symbol for Understanding, a prelude to wisdom. “Binah, the Great Mother, sometimes also called Marah, the Great Sea, is, of course, the Mother of All Living. She is the archetypal womb through which life comes into manifestation.”

Fatima (the daughter of the Prophet Muhammad) was considered to come from the level of angels. She is considered by many Muslims as divine in origin and several variations of a major hadith describe how she was conceived on the night of Mi′râj (ascension).

On this night Gabriel took Muhammad to Jerusalem and then to Heaven. While up in Heaven, he was offered some heavenly fruit, the seed of which was responsible for her conception, after the Prophet′s return on the same night and making love to his beloved wife Khadija.

Mohammad, in referring to Fatima as “The Mother of her Father”, understood that his gnosis was bestowed upon him from the Divine Feminine. Fatima’s own words,

“There is no God beside me, neither in divinity nor humanity, neither in the Heavens nor on earth, outside of me, who am Fatima – Creator.”

and what would all of this mean to a Rule whose sole purpose was the control and manipulation of all of its people through the establishment of a Patriarchal “God” — of course, you’d have to be born of original sin.

Isis and the Throne

Isis is the Greek form of more ancient names (Aset or Eset), and the name Isis is represented in hieroglyphics with a picture of a “throne”.

The throne represented the Feminine power of the Goddess, and the King when he ascends the throne, is actually drawing power from the throne upon which he sits.

To the pre-Christian Irish, water was the source of all life. Eire, after whom the country was named, was the superior Goddess of water and fertility, the island of Ireland being the body of the goddess. The Irish language has no word for the coronation of a king. This is because Irish kings were not crowned; they were married to the goddess in a ceremony called An Bainais – the wedding.

“On Resurrection Day, the sun and moon are released from service:
and the eye beholds the Source of their radiance,
then it discerns the permanent possession from the loan,
and this passing caravan from the abiding home.
If for a while a wet nurse is needed,
Mother, return us to your breast.
I don′t want a nurse; my Mother is more fair.
I am like Moses whose nurse and Mother were the same.

The basic tenet of Tantrism is that matter, and therefore the body, is also a manifestation of Sakti power, that is, the power emanating from the feminine aspect of Divine Reality. In the domain of the spiritual life, the same term Sakti signifies the devi that allows one to enter into contact with Enlightenment.

She is both the key and the mystery;
who can be decoded only through Muladhara …

The child is Brahma; the Goddess is Dakini

Muladhara bears the Sanskrit letters va, scha, sha, and sa and the seed sound in the centre is lam