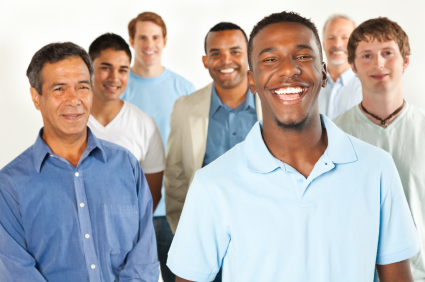 Let me preface this by saying I’m part of this group, too. Just because I’m a licensed therapist doesn’t mean I don’t need therapy. I have many, many things to work on, one of which is getting back into therapy.

Full disclosure: I haven‘t seen a therapist in years. I understand if you think that makes me a hypocrite, but it is my truth. I would rather be honest than pretend to be someone I am not.

Growth is not a light switch. It’s a lifestyle.

But here’s what I’ve learned from both my personal and professional experiences. Growth is not a light switch. It’s a lifestyle, something we must thread into our daily lives. And therapy can be the needle to guide that thread.

Yes, women need therapy too. But multiple studies and researchers have pointed to the fact that women make up nearly two-thirds of therapy patients, while men arguably benefit more from the process.

We have to let go of what we can’t control and just focus on our own shit.

I believe all men need therapy, including myself. Here are four of the most compelling reasons:

You might argue that this lack of definition is about the culture of 2015. Society had a strong definition of “the ideal man” in the ′20s, ′40s, ′50s, etc. But I believe it has to do with the fact that we live in a fatherless nation.

More than ever, our fathers are either physically absent or emotionally unavailable. So, how does a son learn who he is as he crosses into manhood? He doesn’t. The shadow of a suggestion of an identity he struggles after is one learned through advertising, media, and coping.

I worked as a therapist in residential treatment for about six years. I treated teens struggling with addiction, and the vast majority of them had an absent father. The boys clung to me, desperate for a positive male role model. They wanted a guide, a mentor, a man to teach them about life — what all boys crave at that age. I know I did. When deprived of that, they try to fill the void in unhealthy ways.

Therapy is a safe space for men who grew up with absent dads (most of us) to process the loss we’ve suffered, whether we realize it or not, and to create a new, healthy definition of what it means to be a man.

2. Therapy helps you find tools that will exponentially improve your relationships.

Generally speaking, men tend to maneuver more on a logical plane and women on an emotional one. Many men struggle to express their feelings, eventually leaving their partner in the dark, resulting in the two being separated by the unspoken issue(s) between them. Eventually, they grow apart.

I see this all the time in the couples I coach: Men tend to go to “fix-it” mode instead of expressing themselves and holding a safe space for their partner. They struggle with using “I feel” statements and don’t practice building their communication muscles.

Since therapists are trained to help you explore and process feelings, seeing a therapist is like visiting an emotional gym and exercising these expression muscles. Once we have the ability to express ourselves, we can stop trying to fix it. Instead, we can be present, and create a safe space for our partner to talk to us. Then confrontations can turn into healthy conversations, creating closeness, trust, and stronger relationships.

Seeing a therapist doesn’t mean you have problems. It means you want to be a healthier version of yourself. It just means adding more tools to your toolbox. These tools will translate directly into your relationship.

Your partner will see the difference in you and may be inspired to go on his or her own journey. Now we have two pistons pumping. Translation: You’ve stopped the tug-of-war and started to move in the same direction. This is the only way to improve a relationship.

It’s never about the other person. It’s about you.

3. It’s the only way a lot of men ever learn to stop trying to fix everything.

Men tend to think they can do everything by themselves. Not necessarily because of ego. It’s a pressure we put on ourselves to take care of the people we care about. When it comes to relationships, sometimes we don’t realize that we are only 50 percent of the equation.

By thinking we can fix it, we can easily cross the line into controlling behavior without even knowing it. That means we have to let go of what we can’t control, and just focus on our own shit. This is what therapy is all about. Therapists are trained to keep the focus on the client so they can take ownership of their own issues and let go of other people’s.

I believe that with this mindset, the dynamic of the relationship will shift. There will be a lot less pressure and a lot more trust. Of course, women can do the same.

But from coaching hundreds of women, I’ve learned that the majority want their man to take the lead. It gives them hope and builds trust. Then they become inspired to work on anything they need to work on.

We get into a chess game with each other, subconsciously. We won’t change or work on ourselves unless the other person does too. But the only thing that grows in that dynamic is anger and resentment. It’s never about the other person. It’s about you, the kind of person you want to be, and what you want to bring to the relationship.

4. We have a responsibility to be better men than our fathers were.

I know it’s 2015, and much progress has been made. But men still tend to shy away or get embarrassed about seeing therapists. There’s a pervasive misconception that therapy is for people with “real problems.” So, men just talk to their friends, who are biased, and can’t advise them with the same experience, perspective, or authority. Men tend to associate “treatment” with weakness. I think we believe that if we see a therapist, we are admitting defeat. We are admitting we can’t fix it on our own. That last part is true. We can’t. But that’s okay.

Imagine if men went to therapy as much as they go to the gym. How many relationships would be saved? How many sons would have a healthier definition of manhood? And how many daughters would have higher self-esteem and a sharper radar when it came to boys? Imagine how much pain and destruction we could avoid. Then tell me it’s not a good idea.