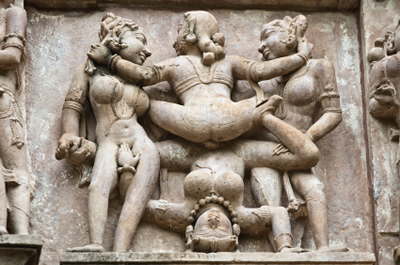 Is group sex really as taboo as it seems?

Tradition holds that if we want to have sex, we’ve got to partner up. Once you find your mate, you can place A into B to create C. But what happens when you add someone to the party? And then another. And another, and another….

In her book, The Bonobo Way: The Evolution of Peace Through Pleasure, sex therapist Susan Block details a standard sexual environment in the life of our “long-lost kissing cousins,” the bonobo, writing, “Bonobo eroticism doesn’t discriminate between genders: all bonobos are, according to their fashion, bisexual or pansexual. Some bonobo sex is relatively private, but most is out in the open where others may watch or join in.”

Block’s description of group sex in humans sets a similar tone. She told me over the phone, “Group sex is not artificial. It’s very natural. And group sex is not particular. ”She added, “I think there’s something in all of us that responds to this idea of ‘more than one.’”

She brought up the notion of “collective joy” and introduced an argument made by Barbara Ehrenreich in her book, Dancing In the Street. Ehrenreich suggests that sporting arenas, nightclubs and dance halls function as some of the few spaces society has designated to this idea of “collective joy.” Block says sex may very well have been one of channels through which our ancestors experienced the phenomenon.

But just because something once was doesn’t make it relevant today. Those who don’t buy the “maybe nature made us this way” hypothesis may lean on another to explain the drive for group sex: it’s fun, and fun things make you happy.

She added, “And there’s nothing wrong with that, and mostly, that’s what we need to do to have a regular sex life. And it’s probably the most intimate form of sex. But, I think there is something very special and truly wonderful about communal ecstasy and opening up to the group that partnered sex just isn’t.”

“Just the smell. Just the intensity of people having sex around you is going to light up your libido. I can guarantee it.”

An online study conducted by the Electronic Journal of Human Sexuality polled 1,092 swingers to better understand the demographic. Of those who reported being in an “unhappy relationship” before swinging, 90.4% said their relationship became happier after entering the lifestyle. The study also found that swingers were more likely to report being in a “happy marriage” than the non-swingers interviewed. (Though some “experts” remain wary of the argument that swinging can actually improve marital happiness.)

Formal group sex takes place often in specific venues that follow a certain set of rules. They serve as one of the rare spaces where women truly call the shots. Couples and single women are welcome to play around in all areas of the club. Single men, if allowed in, are given limited access.

Block told me, “Male aggression is very toned down, and females are encouraged to be assertive… The sheer amount of estrogen just keeps things very peaceful.”

So long as you like group sex (and pussy) these places are where it’s at. Just make sure you’ve talked through the logistics with your partner beforehand. A lot of clubs have sections devoted to “dealing with jealousy” listed under the rules.

Intimacy coach Rebekah Beneteau told me, “The idea that you can have what you want, that you can be the center of attention, that you can go after pleasure is somewhat alien in our society but I really think that that is a healthy kind of selfishness.”

Of course, no conversation about group sex would be complete without mention of voyeurism. Jones told me, “Speaking as a man who’s had a fantasy of being with two women, voyeurism is definitely key. Very few men can keep up with two women who have a high sex drive. So at some point, you’re sitting back watching them. And that’s sort of the enjoyment. You get to see live what you’ve only fantasized about and watched in pornography.”

Beneteau added, “For a lot of women, what happens is once they start getting turned on, and they come once, the get revved up. They have a high need to keep coming. And having multiple guys means they can tag out when they get tired.”

It’s true, a lot of people would be hurt to see their partner having sex with another person. I’d probably fall into that category myself. But if you’re willing to enter into a group sex environment, there are some things you’ve got to understand. One is the idea of compersion.

Compersion is a concept frequently cited by those who practice polyamory. The term refers to deriving pleasure from your partner’s pleasure. This experience can take different forms. Beneteau told me, “For us personally, if he’s been with somebody else, I like to hear about it. It turns me on. But we have to be naked. And we have to be fooling around.”

That said, developing this idea of compersion isn’t easy for those of us who grew up under the umbrella of monogamy. If it’s not something you want to take on, don’t try it. To each their own.

If you are interested in dipping a toe into the group sex scene, however, don’t let fears about jealousy stop you. Block says, “A little bit of possessiveness is okay… But people that ride this wave of swinging or group sex or polyamory turn the jealousy into compersion,” adding, “Jealousy is a feeling of connectedness that goes bad. Compersion is a feeling of connectedness that blossoms into good feelings for you.”
ORIGINAL ARTICLE