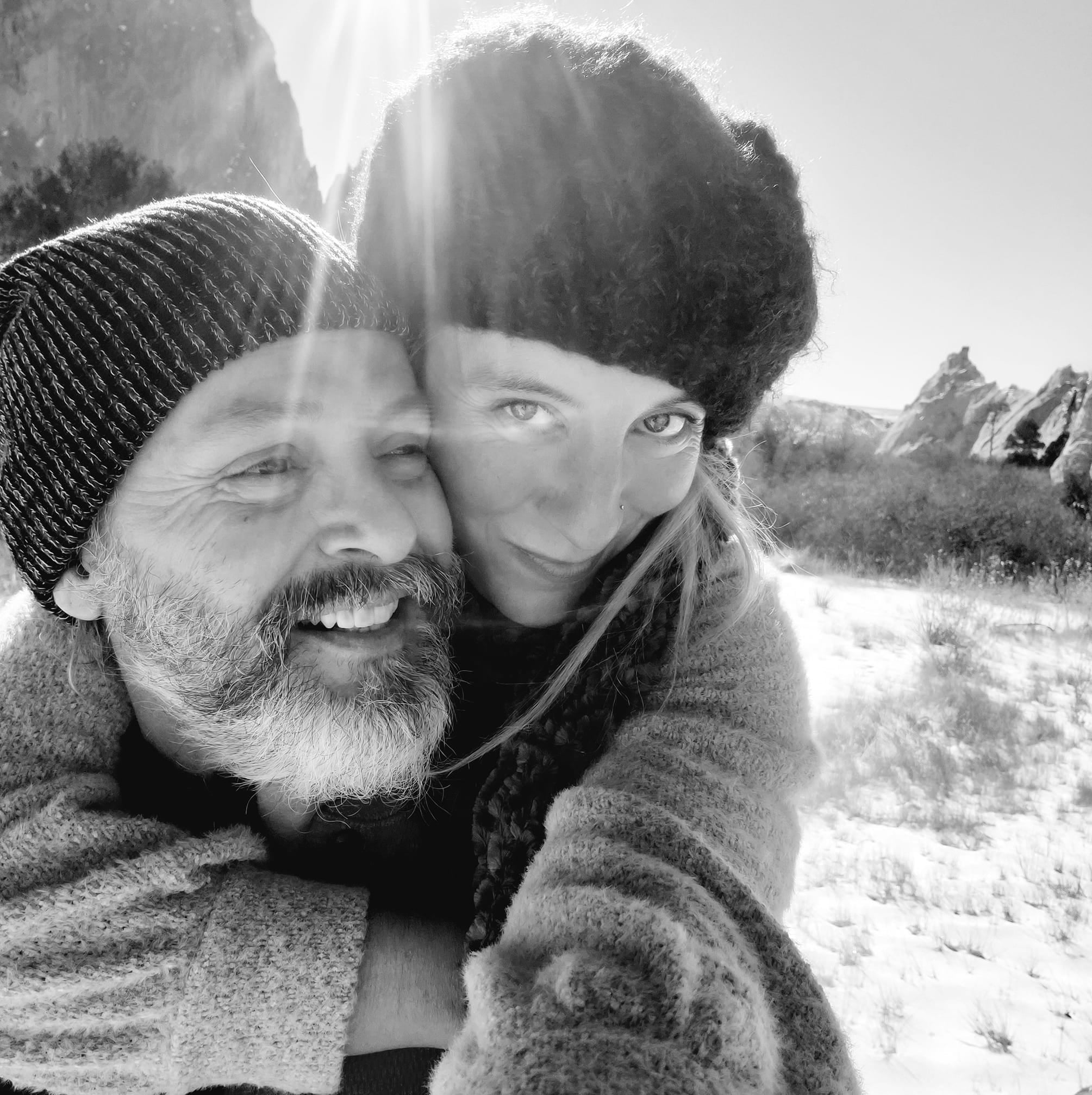 LESSONS REMEMBERED FROM MY BUFFALO MAN

Have you ever watched buffalo during a storm?

It’s an amazing thing to watch and learn from in truth. Today I want to tell you a little tale that my life partner constantly reminds me of, because he truly is like the buffalo.

Years back I was up in Montana hiking and at one point we sat looking over a vast valley that had buffalo grazing. A storm was off in the distance brewing, the sky was darkening and it was obvious that rain was on the front. As the winds picked up and darkness came over us we watched the buffalo charge in the direction of the storm.

We found cover and they ran directly into the harsh rain and wind.

What in the world were these great beasts thinking?

Growing up in Northern California in farm country I was used to watching cattle. My neighbors across the road had hundreds of them and we had our share of harsh storms that would blow through the valley and foothills. Cattle reacted completely differently than what I was witnessing from these buffalo on this stormy afternoon in Montana. You see cattle can feel a storm brewing and when they do, they turn and they run in the opposite direction of the storm. Which makes sense, however the issue with this instinct is that the storm chases them and at some point they find themselves caught up against a fence line or cliff with nowhere to go except to weather the storm.

They do not outrun the storm.

They end up running with it.

And they suffer worse because of this fact, even though it is instinctual.

You may be wondering right about now what these memories I am sharing have to do with you or with Craig, my life partner…

Why did I title this musing Lessons Remembered from My Buffalo Man?

Like I shared above, he truly is like the buffalo in the essence of he charges directly into the storm. No matter the storm in our lives together or in his personal world I have witnessed him strong and courageous like the buffalo, he turns directly toward whatever is happening and moves through it.

I do not see him hesitating in fear.

He is not one to lean into creative avoidance and find things that are seemingly important to work on while the storm rolls in more.

He looks to see what he can do, analyzes what needs to happen, and knows where he wants to be standing when the storm has passed.

From this place, even if he has no real clue as to what will come,

Even though he understands clearly that some suffering will most certainly happen, he still steps forward and calls into action the outcome that he wants.

You see, the lesson remembered from my buffalo man is that suffering is unavoidable.

None of these things will we ever be able to escape. They are part of the magical terrain of our lives on this planet. What we do get to choose is how long we are in them.

The majority of people are like cattle and attempt to run from the storm, causing themselves to get caught up in the chaos and burying themselves in the stress of the storm all the longer. They find themselves avoiding the storm the best they can with “important” things. Creatively attempting to avoid the inevitable only to discover that the storm is at their back and coming down harder now then before and they have no place to turn for cover. Much like actual storms our life storms build on themselves and if we act like cattle we wear ourselves down in our pursuit to avoid and hide or outrun.

In over two decades of coaching individuals and couples, tens of thousands of hours in office practice with these souls I can honestly say that we humans are more like cattle than buffalo and we do it on a moment to moment basis in our lives.

We avoid, put off and busy ourselves when we know that we need to stand strong in a boundary.

We don’t speak our truth about how we are feeling, what we are needing or what we are finding challenges with because we are afraid of the suffering in the storm, so we avoid those difficult conversations and stay quiet, hoping the storm will change course or fade out, only to discover that it is now a raging tornado a few years later.

If we had just spoken up.

If we had just asked for help.

If we had just shared, leaned in and practiced compassionate communication.

The storm would have still had to have been gone through but it would have been mild in comparison to avoiding.

People typically end up reaching out to me when they are caught up in the storm and they feel like they are drowning. Often, by this point they are exhausted, overthrown by fear and lack of trust in self, their mate and life in general. From this space they have to muster up so much more courage, strength and determination to learn how to let go of the stories that they have been telling that have created the storm. They have to unravel webs from decades and all time, they have to learn a whole new perspective on their lives and relationships and often they just don’t have it in them creating the feeling of “why not just throw in the towel,” and many choose to do just this. However, the reality of this action is that it is still an action of them running with the storm, not recognizing that even though there will be suffering they can still choose to turn and run through it with clarity of direction. They may still end up letting go of a relationship, but in the process of choosing to turn and face the storm they are choosing to define their character, strength and life direction verses rolling over and letting life beat them into the muddy waters where they will only find more of the same issues and challenges even if they find themselves in a new relationship.

Last year, I found myself deeply emotional and standing in fear and anxiety like I had not felt for decades. I felt lost in my own being and I was convinced that Craig would be disgusted by me and walk away. I recall a moment in our bedroom where I was crying and he grabbed my hands, stood close where I could feel his breath on my face, he placed one hand on my cheek, looked into my tearful eyes and said, “Your shit is my shit.” I had not experienced the feeling of belief that came with his words like that before, where I truly believed that he had my back. At that moment I could feel him taking my hand and saying run with me…

Not away, but through.

To trust in each other, in life, in our love and commitment to one another.

We humans are not programmed for success, nor happiness.

We are programmed for survival.

In this primal programming of our brains we often choose the path with greater suffering because it “feels” safer. We ignore what we actually have to sacrifice to have that security.

We make light of the things that we claim that we want or even need such as happiness, joy, love, empathy, connection and we drown them out with our fear of not surviving. Willing to give up freedom and liberties to feel safe. And then wonder WHY we are not happy or even content.

The most painful self inquiry we humans make is just this question.

“Why am I not happy?” From this births a virus of true suffering and yet with every virus a cure manifests by its side. Without the asking of the why, we remain complacent and hopeless.

Anger sets in with the asking of why.

Making us crave something more and helping us to once again align to our authentic nature of worthiness and greatness.

Few truly ask this virus question, out of fear of what will come of them when they start to gain answers and discover that the storm they have been running from is the exact storm they must choose to turn toward and run through.

Understanding that life gives no promises.

If we want happiness, success, love, an evolution of self and relationship that it is only up to us and the choices that we make.

It is standing in the commitment.

It is understanding that your shit is not going anywhere, if you want to move through it then that is exactly what you must do…

It is your perfect storm.

And you have the ability to push through and come out the other side stronger, more intact than before and knowing yourself.

These are some of the lessons remembered that my buffalo man blesses me with each day we live our lives together.

I adore and appreciate him and how he consistently teaches me, awakens me and loves me through my shit, his shit, our shit and I wish for you dear reader to know that you too can have this commitment and love.

Your happiness and success in whatever subject of your life is your choice.

Up till now you may have been good with playing small, sacrificing most everything you claim you desire and want for, but have been unwilling or uncertain as to just how to have that beautiful life you feel wants to be birthed from your core…

Heed this lesson and turn with courage toward the storm.

Make up your mind that you will press through to the other side.

Why She No Longer Gives You Here Heart or Desire!

Why She No Longer Gives You Here Heart or Desire!