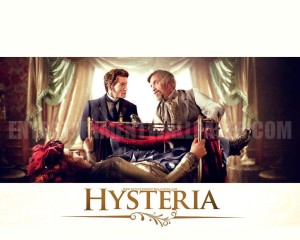 Set at the end of the 19th century, the film depicts the invention of the vibrator. Dr. Mortimer Granville (Hugh Dancy) is a young physician who has difficulty with his occupation due to constant arguments over modern medicine. He gets a job assisting Dr. Dalrymple (Jonathan Pryce), whose practice specializes in the treatment of “hysteria”, a popular diagnosis for women of that time. Medical practitioners like Dr. Dalrymple tried to manage hysteria by massaging the genital area, decently covered under a curtain, to elicit “paroxysmal convulsions”, without recognizing that they were inducing orgasms. He meets Dr. Dalrymple’s Victorian daughters, Emily (Felicity Jones), and her older sister Charlotte (Maggie Gyllenhaal), a premodern feminist who runs a settlement house in a poor section of London.
Granville seems to be good at massaging, getting a sizeable following, while at the same time Dr. Dalrymple proposes marriage between Emily and Granville. One night after work, Charlotte comes in with her friend Fannie (Ashley Jensen) who has broken her ankle. After he helps treat her, Dalrymple forbids Granville from offering any future assistance to Charlotte, hoping to dissuade her from her work in the slums. Meanwhile, the increased clientele at the practice is hard on Granville, and his hand musculature is unable to keep up with the task, leading to getting himself fired. Fortunately, his friend Lord Edmund St. John-Smythe has developed an electrical feather duster, and its vibrations give Dr. Granville the idea to modify the gadget for use as an electric massager. After successfully using it on the Dalrymple’s maid Molly, he persuades Dr. Dalrymple to try the device on his patients, resulting in massive success. Mortimer and Emily then become engaged, while Charlotte struggles with supporting the welfare house.
At the engagement party, Charlotte is arrested after Fannie is almost apprehended by a police officer. At the urge of Emily and Dr. Dalrymple, he decides to testify that she is hysterical in order to prevent her from getting life in prison. During the trial, the prosecutor recommends that Charlotte be sent to a sanitarium and be forced to undergo a hysterectomy. As Mortimer speaks, he explains that the symptoms for hysteria are too common to be regarded as a mental illness, and that he himself believes that Charlotte is the most generous and caring person he knows. The judge agrees with Mortimer’s argument, and Charlotte gets sentenced to just thirty days in prison.
Emily then decides to end their engagement after realizing she was only going to do it to please her father. The vibrator now enters the stage as a medical device for the treatment of the condition, reducing treatment time while greatly increasing customer satisfaction. The royalties from its sale result in independent wealth for Granville, who has since fallen in love with Charlotte. Pledging to use some of his wealth to establish a clinic at her settlement house, he proposes marriage to Charlotte and she accepts.

Movie Nights are community pot lucks as well so PLEASE bring a dish to share or drinks. Please share in comments below what you are bringing to help everyone else know what is on the menu.

Movie starts at 7:30 sharp as we normal have food through out but finish the night with open discussion and Q& A for the coaches.

***If you are interested in coming to Movie Night  PLEASE email me at tantrictransformation@gmail.com and I will provide you with address.